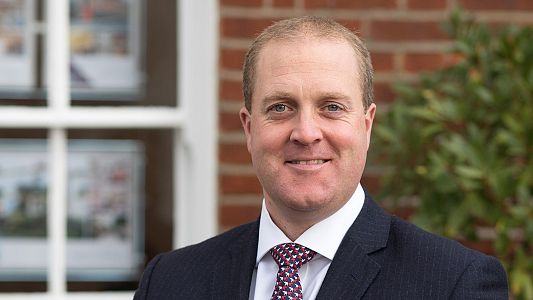 Safe water for more Ugandan families thanks to Billingshurst resident

Safe water for more Ugandan families thanks to Billingshurst resident

A retired vicar from Billingshurst has helped raise thousands for a charity he set up 39 years ago to provide clean, safe water and improved sanitation in Uganda, West Africa.

The Busoga Trust is removing rusting water pumps and replacing them with stainless steel pipes at a rate of 25 per month, equating to 300 a year which helps some 200,000 people every year. The mission of the Trust is to contribute to eradicating poverty and improve the standard of life in rural communities for a better tomorrow.

Andrew Pearson, 79, grew up in the village of Billingshurst where he became curate at St Mary’s Church in the 1970s. However, most of his priesthood was spent in London where he became increasingly concerned about divisions in society and across the world.

Christina at our Billingshurst branch with Andrew Pearson

Keen to forge links with the developing world, a new parishioner put him in touch with a Bishop in Uganda who was equally concerned with improving facilities for people in his region.

“A letter would take days to reach Uganda so rather than exchange ideas by post, four of us flew to visit the Bishop in Uganda,” explains Andrew. “We were shown around and the urgent need for clean water was obvious to see. It was green and greasy and yet people were drinking it and washing their clothes. It was shocking to see first hand.”

The Ugandan Bishop insisted on a water plan because Africa had seen so many pilot projects which didn’t make a significant, long term difference to the communities.

“We soon agreed a plan and since then we’ve rehabilitated about 3,000 water holes,” says Andrew. “When the bore holes were originally installed, they used galvanised iron which rusts so people, often the children, have to travel to get safe water. Every trip puts them in danger of being attacked and they miss school. We can put the water bores right in about three days. The impact it has is phenomenal.

“The Trust has just started work in a new area so we immediately reported to the local district officer to tell him we were planning five rehabilitation bore holes per month. He became quite emotional because they thought they’d been forgotten by the international community.”

The Busoga Trust works with every government and people of all faiths and none, and above all, stands by the poor.

“It costs about £2,500 for a bore hole which will help about 700 people,” says Andrew. “We also run a very tight ship so as much of our funds as possible goes directly to impacting on people’s lives through the clean water and improved sanitation. I pay for all my own expenses other than an annual plane ticket to visit the locations to see the work in action, which of course I’ve not been able to do in the past year because of the pandemic.”

Andrew retired to Billingshurst in 2009 where he now lives just a few minutes’ walk from the High Street. He wanted to keep in touch with the Busoga Trust which he had helped set up in the early 1980s and has continued to work from home, ensuring that more families are able to access clean water in Uganda. There are now 6 trustees of The Busoga Trust which receives no Government help and relies on the generosity of individuals, private sources, schools, churches and rotary clubs as well as help extended by our own local community.

“I’m old fashioned and don’t like to use email but my good friends at Henry Adams in Billingshurst have been very kind over the years,” said Andrew, who calls into the estate agency for occasional use of their photocopier or to have an email printed out if his Trust colleagues need him to respond on a matter of urgency.

“None of the work we undertake in Africa could have happened without the kindness of Christina and her colleagues at Henry Adams, so I’m hugely grateful,” said Andrew. “It’s enabled me to continue to work from home which has been a lifeline especially over the past year.”

By way of a thanks, Andrew has arranged for plaques at two of the Trust’s latest bore holes in Bupendo Kigweeri and Budhumbula Bubanda, in recognition of the support of Henry Adams Billingshurst. More information about the work undertaken by The Busoga Trust and donations can be made via busogatrust.co.uk. The Trust is also open to exploring volunteer or intern positions, talks to schoolchildren and corporate partnerships.

“It’s been a great privilege to help people in desperate need to access clean water,” said Andrew. “It’s something we so often just take for granted.”

Farmhouse transformed from ‘Wreck of the week’ to wonderful family home